Domaine St Jean was started in 2006 with only white varieties on 3000m land. In 2007 2ha were bought and were prepared and planted during 2008 and in 2009 Nathalie and Jean-Patrick started to plant red varieities. The vines are grown on 2.5ha made up of three parcels of land:

There are some 46 olive trees on one parcel from which olive oil is made.

By 2011 20hl of wine was produced, more than doubling to a potential 50hl by 2013 – although the actual vintage of 2013 was not a large vintage. Sadly heavy rains in 2014 extensively damaged terracing and new plantings. The terraces were repaired and new vines planted in 2015 – but fruit from these wines cannot be included before 2019.

Nathalie in her cellar

The harvest is carried out manually, with a yield of 25hl/ha for the Rolle (white variety) which is then given a pre-fermentation maceration at a low temperature followed by a cool fermentation and ageing 6 months in stainless steel and no malolactic ferementation. The resulting white wine is particularly fragrant and aromatic with notes of candied lemon peel.

The first red wine, aged in barrel, was bottled in November 2013 with 240 bottles given special labels and packaging.

A limited edition range red wine was launched on 30th November 2013 during the Portes Ouvertes weekend in the new reception room at the Domaine. Each design had 60 editions, sold as numbered collectors pieces. 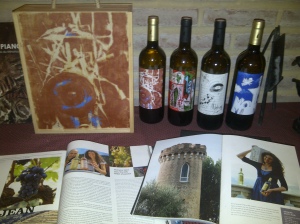 Four artists had each designed one picture which had been reproduced on the the lid of a wine box and which could be taken off and framed. Inside the box are three bottles with matching labels.

Patrick Moya with his design

The wines of Domaine St Jean are available on line.