Jean Spizo – retired professor, puts on plays in Italian and dialect at both his vineyard and Chateau de Crémat. His family is originally from the Veneto, near Udine and ‘fogolar’ is a dialect word meaning hearth or centre of the family home – so when he built his family home in 1974 on the slopes of the Collet Bovis, he named it Domaine Fogolar. He also started to plant vines – finding as he did so, the old roots of a forgotten vineyard and interspersed with old neglected olive trees. His vineyards lie high on the slopes looking south-west over the Var Valley and sea.

Sells wine to Carrefour and also through The Wine Sampler in South Kensington and Islington in London. 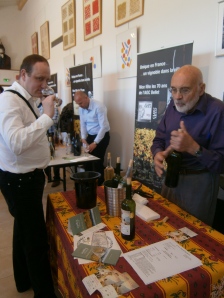