I can still remember the first time I tasted a wine from Bellet. It was the autumn of 1988. I had just started working in wine, and had flown down to Provence for a week of visiting vineyards, staying with my parents in their little holiday cottage. This last day, they were driving me back to Nice airport, then a small one building concern outside of Nice, seemingly perched on the beach. 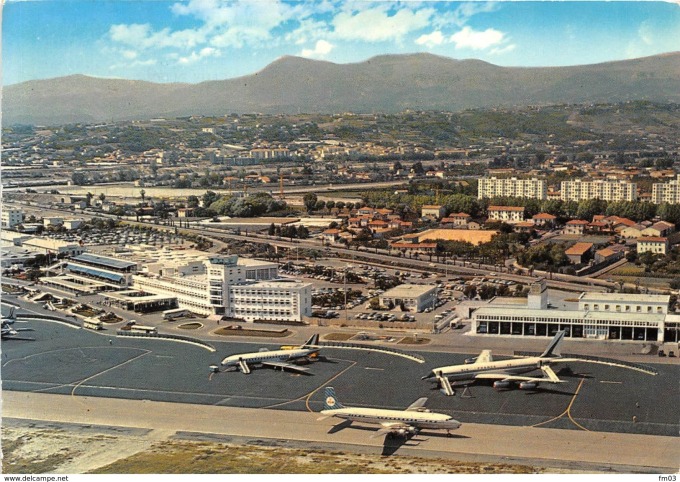 An old view from Nice airport looking north west across the Var. Bellet on the hills to the right.

We stopped for lunch at the restaurant des Verriers in Biot, so named after the thriving local industry of the distinctive, bubble-filled Biot glass. 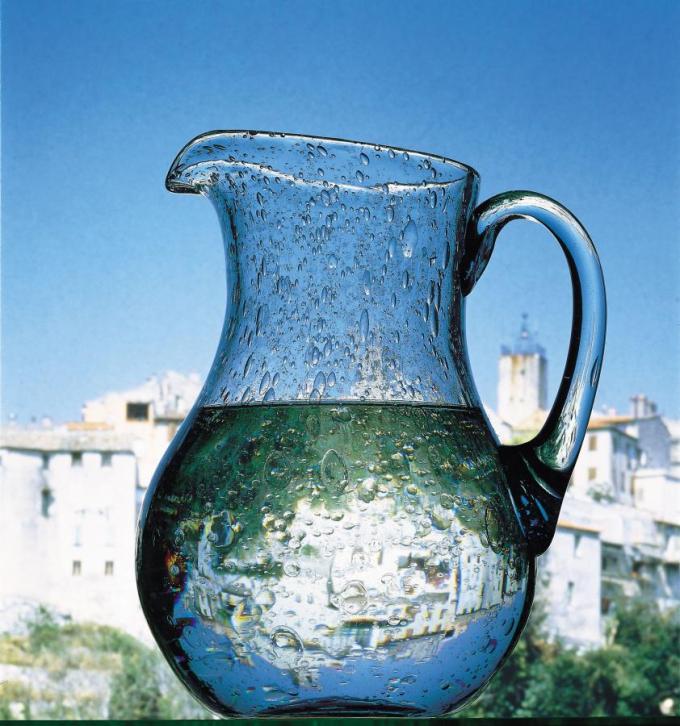 We sat on the terrace, and ordered a bottle of red 1982 Château de Crémat. It arrived in its distinctive squat bottle covered with a fine wire net. I can still remember the aromas and taste of this wine as memories of hot summers filled the glass: the dried roses and carnations of pot pourri, scenting warm cedar wood drawers, ripe strawberry fruit and hints of autumn plums. I remember the sommelier being very happy with my comments and he added that the scent of flowers was typical of the wines of Bellet, because the vineyards were scattered amongst the glasshouses used for growing carnations.

I decided this was a region I wanted to explore, and the next time I drove to the airport I would go via Bellet. I looked at the map and planned my route from the centre of the Var, past Fayence, Grasse, Gattières, across the Var and – voila – I would be in Bellet. 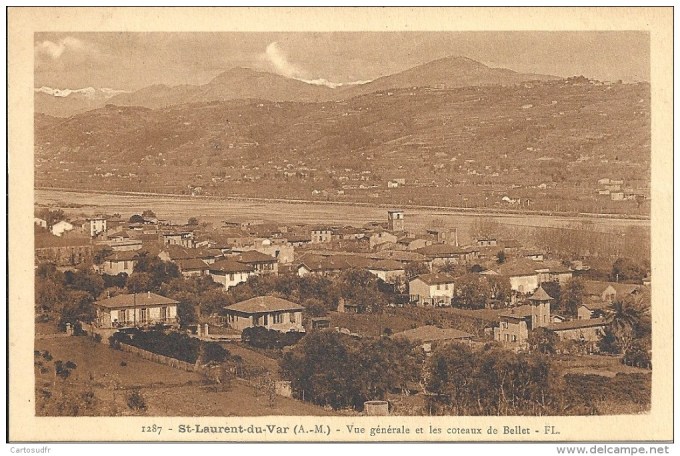 I had not bargained for the length of time this trip would take, and by the time I had reached Gattières, all I could do was gaze across the wide Var river at the vineyards nestled amongst the greenhouses glittering in the sun. Lots of greenhouses. And then I had to race to the airport.

Over the past thirty years the greenhouses have slowly disappeared. In some places, such as Domaine de la Source, the greenhouses have been replaced by vineyards. In other places they were left and abandoned. Now, amongst the vineyards there are a growing number of housing developments, and Bellet is an urban appellation.

As Nice continues to develop, and now expand up the Var river valley, there has been some concerns expressed as to the impact of increased developments on the micro-climate. Vineyards on the western slopes overlooking the Var in particular now look over the large Riviera Allianz stadium, a growing airport, tramlines, offices and housing. Campaigners struggle to fight for the valley to be an ‘eco-valley’ preserving the green spaces on the valley floor which were once market gardens, but the city continues to grow. 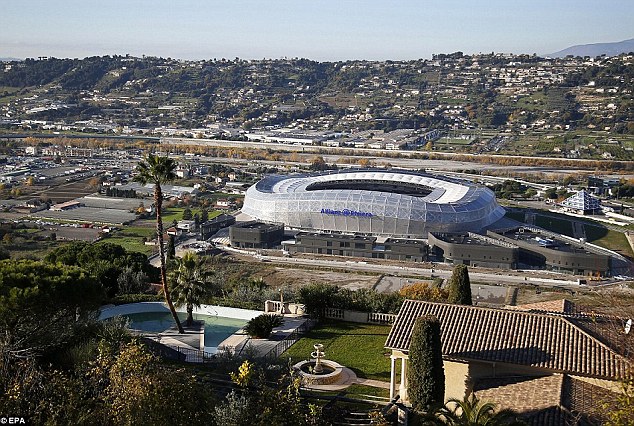 Riviera Allianz stadium seen from the hills of Bellet

I was reminded of this when I recently saw a chart from the American Association of Wine Economists, listing the most expensive vineyard areas in France, which included those of Bellet. This goes a long way to explain the high prices for a bottle of wine from Bellet and producers have risen to the challenge, consistently producing exciting wines from the region. 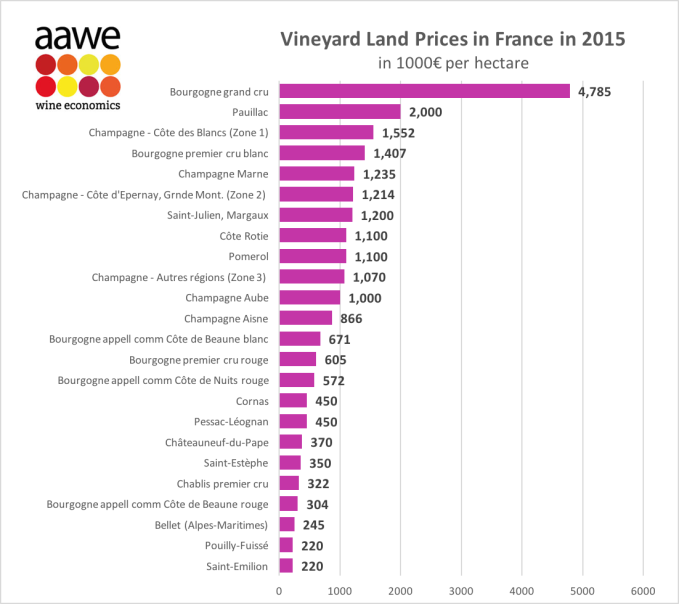 The price of vineyard land in France

The pot pourri and cedar are no longer hallmarks of the red wines. The floral scented Braquet is increasingly used in the appellation’s distinctive rosés, leaving red wines predominantly made from Folle Noir, with its Syrah-like spice and black fruit and Italianate mineral acidity and firm tannins. Rolle, once only found in the white wines of Bellet, but now all over Provence, is still the main white variety.

It is quite an achievement that the ten producers in just over 50ha have managed to maintain both a market presence and a high standard of wines.

Bellet vineyards host two open day ‘Portes Ouvertes’ weekends a year – one in May with the new vintage, the other at the end of November – to provide an opportunity for customers to visit each of the domaines in a festive atmosphere and taste Bellet wines in-situ. We went along for the second day. Despite the heavy grey clouds and blustery winds, the weather remained dry, so there was a good turnout of visitors. The Saturday had been less well attended, possibly due to a rugby match in the stadium below the vineyards in Bellet. END_OF_DOCUMENT_TOKEN_TO_BE_REPLACED

Next weekend (29 and 30 November 2014) the vineyards of Bellet will be opening their doors (from 10h – 18h) for visitors to come and taste their wines and make their selections for the Christmas festivities and gifts. 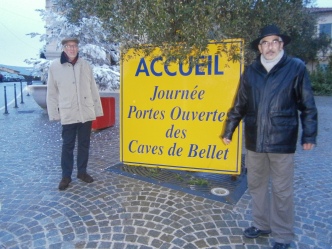 A wet, but warm, welcome at the 2013 Bellet Portes Ouvertes

Last year it rained solidly throughout the weekend, making the dash from car to cellar a very wet experience, so I am very much hoping that this year will be a slightly drier event.

Most domaines will be offering tastings of their current vintages of rosé and white wines from the 2013 vintage, with some older, oak aged whites and red wines of various vintages. 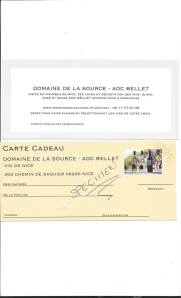 The brother and sister team of Carine and Eric Dalmasso at Domaine de la Source are offering socca and roast chestnuts with their wines, They also have gift vouchers for wines and a vineyard visit. 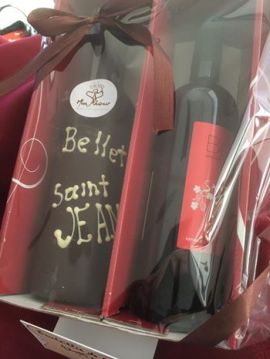 Red wine and chocolate on offer at Domaine St Jean

Nathalie and Jean-Patrick Pacioselli at Domaine St Jean are offering a gift package of a bottle of their red wine with a chocolate wine bottle made by a local chocolatier…. looking forward to tasting that combination!

Many vineyards also have their own olive oil as well.

The route round Bellet forms a neat circuit on the hills above Lingostiére and St Isidore. 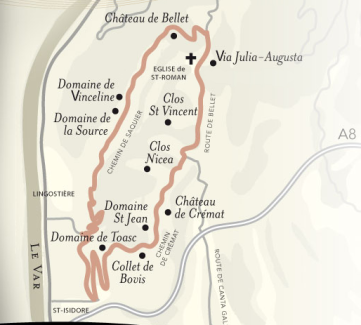 The Bellet route des vins on the hills north of Nice