Saturday 24th November was a bright sunny day – auspicious for the launch of the first commercial book on Bellet, written by local winemaker and politician Olivier Bettati, on the terrace of Château de Crémat. He owns Bellet vineyard Clos Nicea.

The launch was packed, attended by dozens of locals – many of whom evidently knew Olivier Bettati – with a festive atmosphere. Each Bellet domaine had a stand where visitors could taste its wine. 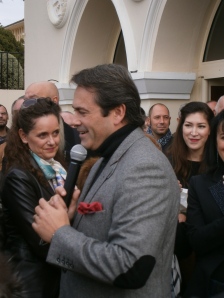 Olivier Bettati at the launch of his book

The book is big, full of colour photos, descriptions of the region of Bellet, wine-making, details of the vineyards, interviews with friends and their favourite local food and recipes. It is full the author’s love for the city of Nice – Nissa la Bella – and of his interest in its wine and food.

This is very much a ‘coffee table’ book – with two thirds of its pages taken up with photographs.