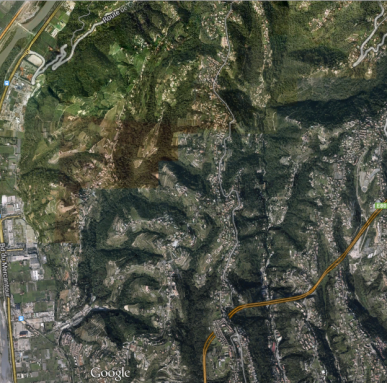 The hills of Bellet generally run north-south but also with smaller valleys with north-south exposure. Some vineyards have a southerly Mediterranean exposure, some a northerly alpine exposure. Some face the rising sun, some the setting sun and different altitudes also influence the climate.

The same section of map showing the small rivers which flow through the hills.

The Var river and the alpine rivers which run into the river have created vast gravel beds in the lower part of the Var river.

The gravel and ‘galet‘  (stones rolled round and smooth in water) are gathered from the river bed for building (and keeping the river clear to prevent flooding).

The region of Bellet lies to the right of the orange shaded area.

The hills on either side of the river have similar soil composition. The soil is sedimentary, pebbly with the round galets and fine sand compacted together to form a rock called poudingue with streaks of clay (argileuses). 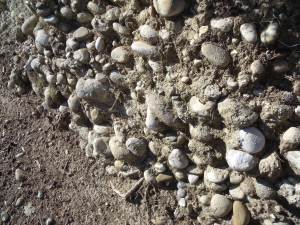