While I was giving a tasting of Bellet wines on a super-yacht in Monaco, Chateau de Bellet held their opening night for their new cellars and tasting room.

Fellow blogger Chrissie McClatchie of Riviera Grapevine attended and wrote up the event for me.

“Back in 2012, it was announced that the acclaimed Nice vineyard Château de Bellet had been sold to La Française Real Estate Manager (REM), a management company with a demonstrated interest in the wine industry, counting over 30 French vineyards in their portfolio.

REM had acquired this historic vineyard, so intertwined with the history of Bellet wine itself, along with another vineyard in the small Niçois appellation, Les Côteaux de Bellet. 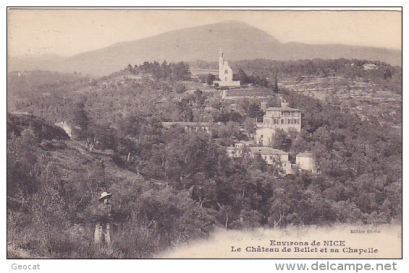 Château de Bellet had been the family vineyard of the Barons of Bellet for over four centuries and the sale not only marked the end of an era but it also heralded the first foray of corporate ownership in the appellation.

Three years on and the handover is REMseemingly complete. Grandson of the last Barons of Bellet, and staunch upholder of tradition in the appellation, Ghislain de Charnacé, spent two years consulting with the incoming wine-making team and 2014 was the first vintage without his guidance. New vines have been planted, a more modern logo has been commissioned, and, after two years of renovation and construction, a revamped tasting room, new wine cellar and function room was finally unveiled one evening in early June.

Much interest and intrigue has surrounded the project and an air of anticipation prevailed in the lead up to the re-opening. The de Charnacé family have retained their private residence, the ‘Château’ of Château de Bellet, which dates from the 17th century, but the land surrounding it, including the picturesque hilltop chapel, is now the property of REM.

Built in 1873, this chapel, for so long being the symbol of the vineyard but one which remained closed off to everyone but family, is now the boutique and tasting room for the new site. After careful restorations, and some minor renovations, the space has been de-consecrated and now makes for the most atmospheric tasting setting of the entire appellation. 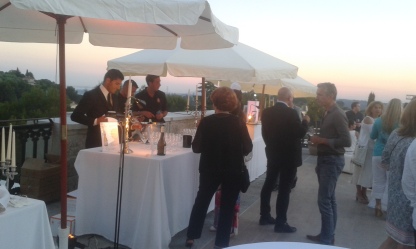 Sunset over the Mediterranean as a backdrop

To provide a modern contrast, an 800m², purpose built cellar has been constructed over two floors just below, with state of the art gravity fed wine-making equipment and a large function room which will undoubtedly prove popular for weddings and seminars.

The theme for the re-opening celebrations was ‘Rock and Rolle’, a nod to the great white grape of Bellet, also known as Vermentino across the border in Italy. With the current thirst for Provence rosé in the wine world, it’s easy to forget that Bellet is first and foremost a white wine appellation. At Château de Bellet, white wine accounts for nearly half of the total production. 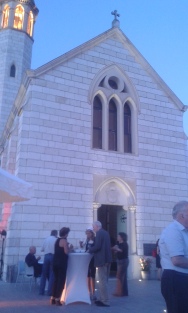 Guests were welcomed on the terrace outside of the Chapel, itself all lit up for the evening. A series of gourmet stands were set up to give the event an upmarket night market feel, serving a variety of epicurean delights from freshly flame grilled prawns and cuttlefish skewers to lobster risotto and cêpes raviolis.

Intertwined with the food stalls were the stands devoted to the stars of the show, the wines. The current release vintages of the property’s three prestige wines, the Cuvée Baron G white 2013, red 2012 and rosé 2014, were on the menu with the winemaker and the Château team on hand to introduce their wines.

As the sun set the Paris based director of REM’s vineyard investments, Patrick Ribouton, made a heartfelt speech, singling out for particular praise the Bordeaux winemaker Eric Boissoneot, who has held a vital consultation role in REM’s Bellet interests since day one. 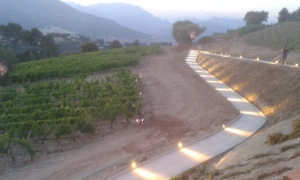 Illuminated pathways through the vineyards of Bellet

The formalities were brief and from there guests were left to soak up the atmosphere as the rock and rolle theme came to the fore, with a live band ensuring that revellers were entertained into the early hours of the morning.

Château de Bellet is now open for visitors from Monday to Saturday, 10am to 5.30pm. A guided visit of the cellars and tasting of your choice of four wines is €20.”

One thought on “New Beginnings at Château de Bellet”