One of the major problems with any northern hemisphere pre-Christmas promotion, is the weather, and 2013 was no exception. I could only go on Saturday 30th – and the weather was – well, to put it mildly, bad! With snow being threatened by the weather forecasters, we drove down in raging winds and rain, wrapped up against the elements. When we arrived in Bellet, it was evident very few other people had chosen to also brave the weather, and instead we passed vast queues of cars trying to get into Lingostiere – the local shopping centre. (Of course the weather was glorious on the Sunday!) 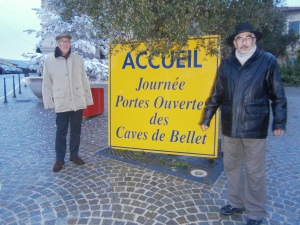 Despite knowing our way around the appellation, the distinct lack of signs that there was indeed a Portes Ouvertes on that weekend plus zero indication of where the vineyards / cellars were and whether or not they were open was a sure turn-off for any casual or new visitor to the area and at one point we did start to doubt whether or not the weekend had indeed been cancelled. Maybe future open days could feature a big bunch of ballons – white, pink and red? at the gate of every domaine open to welcome visitors – it would certainly save on the hesitation of creeping round narrow hairpin bends looking for a vineyard!

In St Roman de Bellet we spotted a couple of cold bedraggled volunteers manning a stand before we made a dash for the cellar of Via Julia Augusta where Robert and Nicolas Cohendet were waiting, warmly wrapped up in winter coats, hats and gloves!

Here we tasted both 2011 and 2012 vintages of white and rosé (of which the 2012 were showing lots of fresh floral characters) and the 2011 red, distinctive in Bellet for using a high percentage of Braquet (normally reserved for the rosé), giving the wine the traditional red Bellet floral character. This floral character was often attributed to the fact the vineyards were interspersed with vast green houses growing flowers, but obviously reflected a greater use of this variety. Indeed, a sweet wine made from Braquet was traditional until the mid-19th century.

We then drove on to Domaine Fogolar – Collet Bovis,  the most southerly domain of Bellet, located on the hill of Collet Bovis and looking out over the Mediterranean.  This is also one of the older domaines, with its first commercial vintage in 1991.

The red wines from both the 2010 and 2011 vintages were both showing good fruit and firm structure. The 2010 in particular was very full-bodied.

Unfortunately the vagaries of the 2013 vintage means that the yield here is down by almost 40% so will only produce an oaked white for this vintage.

These wines will be available in the UK through The Wine Sampler in Kensington and Islington in London.

Our final stop of the day was at Domaine St Jean for the launch of a range of four artworks decorating wines and wine boxes. With three bottles in each box with matching label and a lid for each box being numbered (only 60 copies of each picture) the art work can be framed.